Now that we have tested this set of rules, it’s probably helpful to capture how they stood at the testing date! Especially as they are about to change pretty solidly… You play one of 2 to 6 cottagers, leading a team of gatherers in an engineered wilderness, somewhere in Aotearoa, New Zealand.

Your aim is: forage, craft, sell.

The game is played over two phases: forage and craft, then sell.

In phase 1, gather resources through worker placement and trade, then use them in recipes to create products. As your skill level increases, so does the value of the products you can create. The more products you have and the higher their value, the more opportunities you will have to make money through sales.

You must also work on yourself by increasing your personal attribute scores in guardianship, community, kindness, and acumen. The more well-rounded your personality, the more likely you are to close the sales.

In phase 2, at the market, your aim is to match customer needs to your products, while overcoming their moods with the help of your attributes and experience. The more sales you make, the higher your experience score.

The combination of attributes and experience also helps overcome mood-killers (disruptions that could cost you your sale).

At the end of the game, add the value and number of sales to your experience points, and subtract the number of mood-killers you were unable to avoid. This is your final score.

Setting up The Valley

Shuffle the hex cards, then deal them out, with the teal (werewere-kōkako) side down, working horizontally from left to right and top row to bottom row, until all the spaces are filled. You will have three leftover hexes. Place them back in the box.

Frame the hex tiles with the four Artisan Corner boards.

Cottages may be placed on any of the points of the hex shape (marked in blue in the example below). No hex tile may ever be shared with another token.

In the first hour of each day, all 3 gatherers must start out on the foraging board tiles, with G1 starting adjacent to the cottage.

If the gatherer/apprentice is working on a recipe in the cottage, advance/complete the recipe. Continue taking turns placing a gatherer, in turn order, until all have been placed. The cottager (working on recipes) moves last.

You can choose to leave some or all of your gatherers in place, or move them to any tile adjacent to the one they currently occupy.

If sending one or more gatherers to trade or train for an Artisan skill, do so now. They will miss the upcoming harvest. Only one gatherer can occupy the Artisan triangle at a time, whether training or trading.

If your gatherer is working on a recipe in the cottage, you advance that gatherer on the recipe (see below).

When a gatherer or an apprentice returns to the cottage, they miss that harvest. They can also choose to stay and work on recipes, or return to any tile adjacent to a team member in the next hour’s “movement” stage.

Any skilled trainees or traders (who have missed the last harvest cycle) can now return to the board. If there is a space free next to their Artisan triangle, they must take that. If (and only if) all the tiles adjacent to the Artisan triangle are taken, they can choose any other tile adjacent to one of their team.

Gatherers who will be working in the Valley must always be placed adjacent to the cottage in the first turn of the day, and adjacent to any other meeple from the same team in future. No two meeples can share a hex tile, and no meeple can move onto an occupied tile, unless the occupier is their own apprentice. If a gatherer has taken a spot guarded by an apprentice, the apprentice must move on their turn.

In order to gain the necessary skills for the team to make advanced recipes, each team must send one gatherer (not the apprentice) to spend an hour with each artisan. If you are training a gatherer, move them to that artisan’s triangle this turn. They will miss the next harvest, and return at the move phase after that with an Artisan Card. Once the Artisan card is received, you will also be able to trade at a better rate with all the artisans.

Storing traded supplies: you may store as many traded supplies as fit on your card. If your card is full, you may not trade with Artisans until you have used or traded away the supplies (apart from at the end of day 5).

The first player may now place their apprentice. The apprentice must only be adjacent to any other meeple from their team, including in the first turn. Apprentices working in the cottage must be placed on the cottage board.

If an apprentice is guarding a spot, a gatherer from the same team may take that spot. The apprentice must move off the spot in their next turn. Apprentices working in the cottage must be placed on the cottage board. 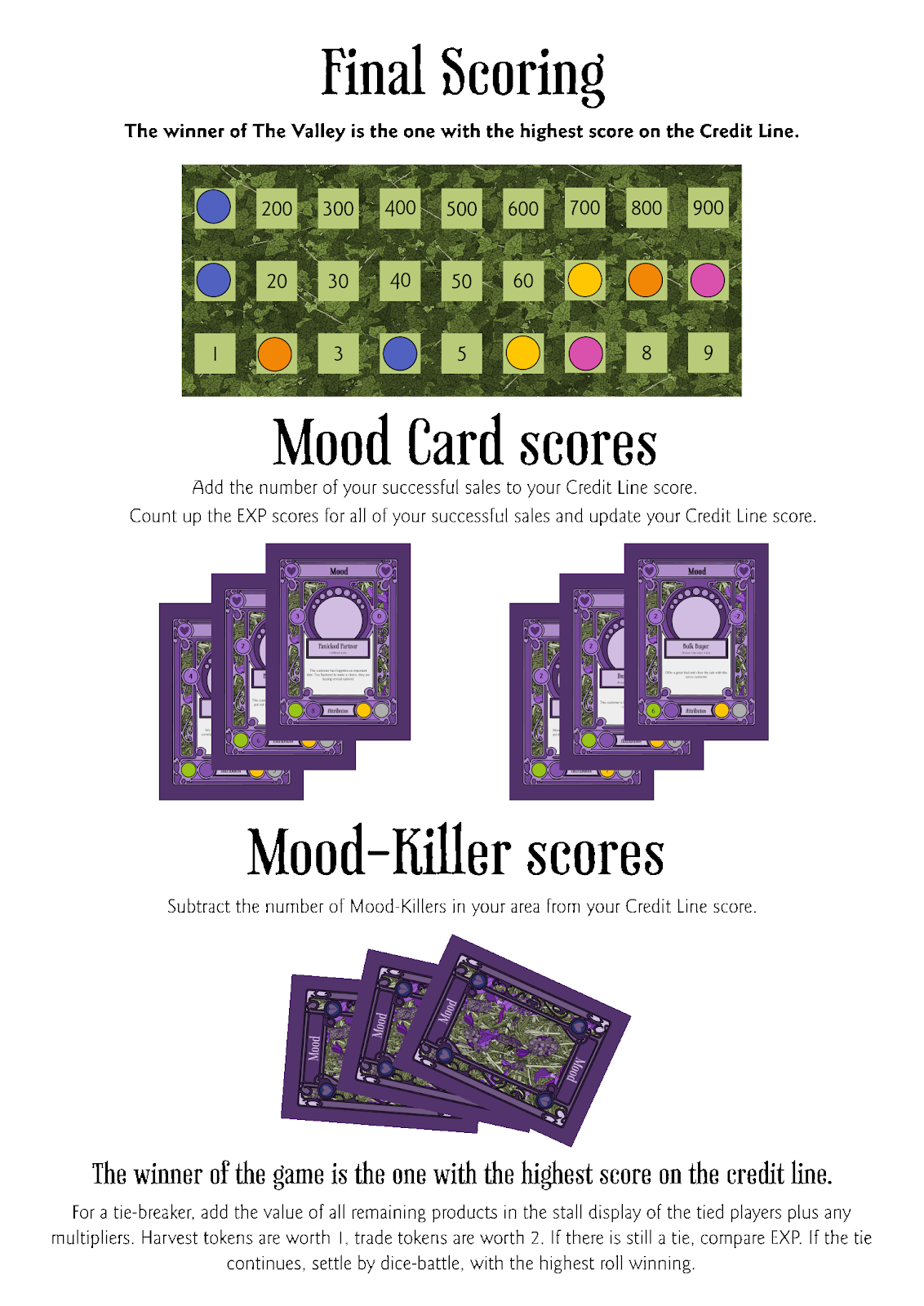 In this game, which is set in New Zealand, you will come across words from our Tangata Whenua (indigenous people), the Māori. Māori words have multiple meanings and uses which are context-dependent. Here are translations of the words we use in the Valley, relevant to their uses in this context.

Māori vowels are pronounced similarly to French vowels, and have long and short forms, indicated by the presence of a macron. There is a good pronunciation guide here:

Aotearoa – New Zealand; literally “the land of the long white cloud”. Used regularly in NZ English to mean the whole country, although that use is contentious as it was originally only used by the Māori people to mean the North Island.

Iwi are the largest social units in Aotearoa (New Zealand) Māori society. The Māori-language word iwi means “people” or “nation”, and is often translated as “tribe”, or “a confederation of tribes”.

Mānuka – Leptospermum scoparium, a species of flowering plant in the myrtle family Myrtaceae, native to south-east Australia and New Zealand (including the Chatham Islands).

Pikopiko – a Māori word for the young curled shoots of ferns. Once harvested, pikopiko can be peeled and washed to remove the bitterness, then steamed, boiled, stir-fried, chopped and added to bread dough, blended with oil and nuts to make a spread or simply used as a tasty garnish.

Keep up with The Valley!

Signup for news and special offers!

Please look for a confirmation message in your email!